Earlier this year, I did an an interview for the Aldora Britain Records e-Zine, which was published in the December 2022 edition. We talked mostly about song-writing. Check it out if you are so inclined.

"Jukka carves out compelling and intricate original tunes with a keen ear for melody and sonic textures."

My Enduring Love Affair with My Bloody Valentine's Loveless

I don’t remember when I first heard My Bloody Valentine’s Loveless, 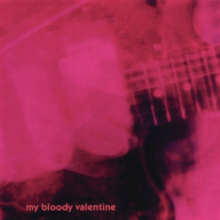 but by the end of 1992 it forever changed how I listened to and heard music.  Already a fan of the so-called “shoegaze” movement of guitar-driven bands mostly from the United Kingdom, I was entranced by Loveless; how it took the ethereal sounds of bands like the Cocteau Twins and the Jesus & Mary Chain to a noisier level, while combining it with the production of something like the Beach Boys' Pet Sounds. My first year college roommate had a great stereo and didn’t mind loud music, so I listened to it a lot. 31 years on, my relationship with it remains intact. While my engagement with this album has ebbed and flowed over this time, it has always been a benchmark of sorts for me. The epitome of what noisy pop melodies could be.

Over the years, the mythology surrounding the making of Loveless has flourished, perhaps only rivaled by the reclusiveness and isolation of Justin Vernon during the making of Bon Iver’s For Emma, Forever Ago in a Wisconsin cabin. It took Kevin Shields and the rest of the band at least two years to record the album. In that time the band occupied two dozen different studios and gave birth to many stories that seem almost ridiculous by most standards. In one story Shields spent an entire week trying to get just the right tambourine sound on one track. In another, a studio technician was sent out on a day long search for a very specific amplifier only to be told that Shields had forgotten about it by the time it was located. Shields also claimed that he refused to supply the record label with written lyrics for the largely indecipherable vocals. Instead, a record label employee had to transcribe (to the best of their ability) the lyrics for the copyright applications. The time and money spent making Loveless is often credited with bankrupting Creation Records, the label that put it out.

Loveless’ sonic textures take the listener on a ride. The production is dense but flowing at the same time. Shields eschewed both reverb and stereo separation in the production. This gives the record both its intensity and its density. The listener is awash in accidental harmonic qualities coming from the volume and noise. Most of the drums are programmed using samples of Colm Ó Cíosóig’s drum hits. This was necessary due an underlying injury he had during the recording. However, the result gives the production a hint of organic electronica.

While it is easy to only focus on the production and the “sound”, underneath it are great songs. While the best guess lyrics seem esoteric, the structure and melodies of the songs exude a power and pop sensibilities. The songs are mostly straightforward, taking to heart the notion that too many chords will ruin a pop song.

Loveless has evolved over the years in a sense. Shields has remastered the album a few times, almost treating the album like a continually evolving work – almost the way that Leonard Cohen continued to change the song “Hallelujah” throughout his life. Most recently, Shields did an all-analog remastering of Loveless. Due to the way the songs bleed into one another, they had to be digitally mastered originally. However, with time, money and experimentation, Shields was able to remaster the album completely on tape, having to splice the tape together creatively to achieve the same transitions between songs.

Loveless seemed like one of those albums that others should leave alone. However, over the years I have heard some (not many) good interpretations of the songs on this album. Most notably, in my opinion, is Blue Loveless – a tribute to this album by Korean underground bands. However, there is also Yellow Loveless and Purple Loveless – tributes by Japanese and Indonesian underground bands, respectively. Japancakes from Athens, Georgia recorded the album in its entirety with pedal steel guitar replacing the vocals and melodies throughout.

Which brings me to now. I always heard the potential for “When You Sleep” to be a lazy, stripped-down, folky ballad. So, I finally decided to throw my hat in the ring and try to pay homage to an album that has inspired much of my music over the years.

My Take on Canceling Spotify

Let me start with a few disclaimers. I grew up in a household with a working musician and songwriter.  I am a both a Spotify paid subscriber and a recording musician utilizing it and other digital distribution platforms. I am a big Neil Young fan. I have never listened to Joe Rogan’s podcast.

I think the debate over Spotify and the “delete Spotify” movement is a little misguided.

First, Neil Young’s position, although initially coming from an earnest place, comes across as a little self-serving in the end. He became the center of a conversation about fairness and morality in the music industry for fifteen minutes and may have spiked sales in his music for a short while. (I would be interested to see any data on that.) And for the record, making a deal with Amazon (hardly a model corporate citizen) after leaving Spotify seems a little weird.

Second, based on what I have heard about him, Joe Rogan seems kind of like an asshole – the latest in a long line of so-called shock jocks. This being said, he shouldn’t be silenced. If we silence him, there are a lot of other people in the world that need to be silenced as well. In a world where Fox News is the primary source of news for a large swathe of Americans, I don’t think that Joe Rogan is the biggest problem.

And now onto my final point. Spotify does not pay artists fairly. This is not news. But why are we so fixated on Spotify? The conversation should include Apple Music, Amazon Music, Youtube, Deezer, Pandora and even Tidal (even though it pays at least double what the other platforms do). These are all technology companies masquerading as music companies, looking to drive a return. Why do we expect more of them? Furthermore, in a historical context this is just the latest incarnation of exploitation in the modern music industry, beginning most egregiously with African-American musicians and songwriters in early twentieth century not being compensated fairly (if at all) for their work. Rock and country were built on the misappropriation of their work.

The truth is that it has always been hard to make a living in music, especially recorded music. My father was on the road probably two-thirds of the year in order to make a living. Album sales did not and do not provide sufficient income, unless you are a big name or have the backing of a large industry player. And with today’s barriers to entry being so much lower than in the past, there is so much more music available making it even harder for artists to get noticed.

In the midst of this unfairness, the listening public has changed. At the turn of the millennium, file sharing platforms got music consumers used to the notion of free music with digital formats that were a convenient medium. So, while we complain about Spotify’s exploitative behavior, we the listeners have contributed most to this debacle. This chart speaks volumes. No amount of streaming will make up for the declines in this chart.. 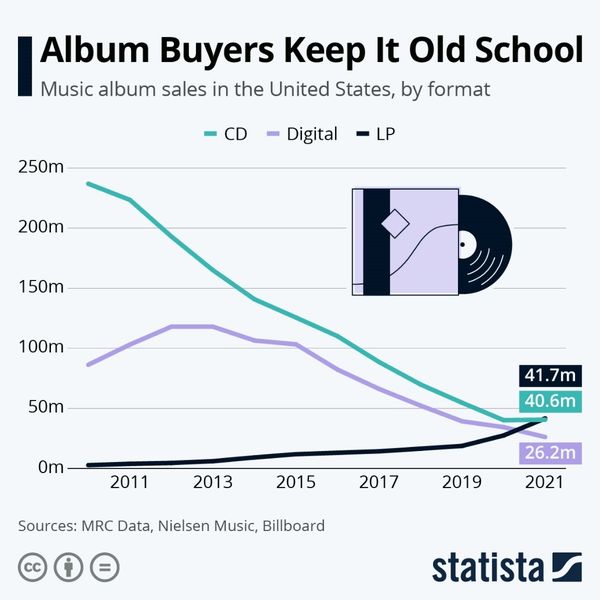 Eduard Banulescu over at Alt77.com wrote a nice review of the track "Can't Go Back",

Drawing a rightful comparison to the Lemonheads, he writes: "Jukka Westhues’ Can’t Go Back feels like a song written on the spot. It sounds like a sound that couldn’t have existed any other way. Jukka Westhues is able to make use of Evan Dando’s melodic punky approach and create something simple, immediate, and with plenty of heart."

See the full review at https://alt77.com/jukka-westhues-and-dribbler-review/ and check out the site in general. There is a lot of good music writing on the site.

I am very excited to announce that my latest 5-song EP, Wicked Crown, will be available on your favorite digital platform on June 11, 2021. A limited number of CDs will also be available. It is available for pre-order on Bandcamp right now. These songs have been recorded over the past few years with the help of Adriel Ferguson on drums, Rachel Gawell on cello, Danny Peña on accordion, Pat Hanlin for mixing, Paul Mahern for mastering, and Learan Kahanav’s photography for the cover. Please keep an eye (and ear) out for this this in June. 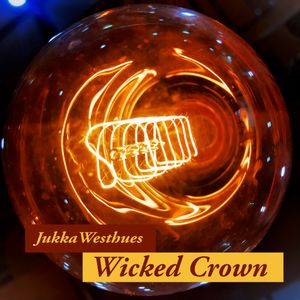 This song was written in January 2017 and re-recorded and released in time the 2020 US elections. The song features Kolja Westhues on drums. Available at Bandcamp, SoundCloud and YouTube today. All other platforms coming soon. Cover photo of Mac Blackout's mural by Jennifer Griffin (www.unsplash.com). Happy listening!

A borrowed Fostex 250 4-track recorder and Yamaha RX-5 drum machine; some cheap guitars; a cheap keyboard. No fancy equipment or studio. A mixture of 1980s college rock, shoegaze, and Britpop—all through the lens of the American Midwest. A handful of tapes were distributed to friends and family. This release is cleaned up and mastered, but otherwise the same exact recordings.

On June 20, 2020, I performed a live stream event focusing on the music with a Scandinavian/Nordic connection. It was the the summer solstice, the longest day of the year for the northern hemisphere. This day is a big deal for northern countries, particularly Finland and Sweden. I compiled one song from each of the countries (west to east) into a live recording: Solstice Live.

At this time, I am only making it available on Bandcamp. It is available free or pay what you want. All proceeds from this recording will go to the Extinction Rebellion, “a decentralised, international and politically non-partisan movement using non-violent direct action and civil disobedience to persuade governments to act justly on the Climate and Ecological Emergency.”

I hope you enjoy music and are staying safe.

Jukka Westhues releases The Koti Sessions EP on May 1, 2020. Recorded during 2018-20, The Koti Sessions EP is a collection of mostly acoustic songs drawing on elements of folk, Americana, and even classical. This project has been a slow burning labor of love, recorded exclusively at home. The word “koti” is Finnish for home. As the world entered this strange (and necessary) realm of lockdowns and social distancing in 2020, this notion of home became ever more poignant. It was finished with a new sense of urgency.

This is Jukka’s second release, following 2017’s Few and Far Between. A lifelong musician, his music is deeply rooted in the American singer-songwriter aesthetic and indie rock of the 1990s, combining lyrical impressionism and a textured sound. A multi-instrumentalist, composer, and producer, his tools of choice are his voice and a guitar.

The EP is available digitally immediately on Spotify, Bandcamp, and Soundcloud. Other digital platforms will come on line within a few days, and a limited number of CDs will be available later in May. Follow Jukka on Facebook, Instagram, Twitter, Youtube and www.jukkawesthues.com for updates. A lyric video for “Can’t Go Back” is available here.